Waking up to the news that George Zimmerman had been found not guilty over the death of Trayvon Martin was troubling and disheartening in equal measure. Not only because of the inability for justice to be served, but also reflecting on my own 17 year old son.

He is the same age as Trayvon, occupies the same social, cultural, and racialised context as Trayvon. Somehow this morning that verdict made me question the injustice where a death as a result of a gunshot cannot be held accountable on the basis of “lack of evidence”.

A dead body with a bullet appears not to be evidence enough. The “stand your ground” defence in this case highlighted the flaw in aspects of how it is framed, when you have cases like Trayvon Martin.

Similarly, Oscar Pistorius, reminds us yet again that where the victim is not available to give evidence, then we air on the side of the perpetrator who somehow is seen as less culpable based on being able to show remorse in front of the cameras. However, in both cases could young black people shoot anyone dead and cite a legal reason for being released on remand or in Zimmerman’s case, be set free? I THINK NOT!

As a criminologist who has struggled with engaging sections of the academy around a dialogue concerning, race, racialisation and crime, I feel disarmed yet again. Over the last few weeks we’ve had the EDL splashed across the media concerning their response to the Muslim community, the tragic death of Lee Rigby, the suspicious deaths of Smiley Culture, Kingsley Burrell, and Mark Duggan, the recent revelations emerging from the Stephen Lawrence case and the list goes on.

Yet in my own discipline of criminology there is an eerie silence concerning how the commonality of race is being rendered invisible by a privileged silence. So I asked myself a question. Is it a veil of silence? Or is it the way in which we as academics are supposed to be – objective, rational, cool and insightful from a distance?

Is the response going to be more research papers, conferences, heated conversations during the break from lectures or debates until the next issue comes along? When I sit with my son and his friends they question the validity of academics when issues that affect their lives are not fully broken down and explained to them.

In essence they’re saying that our response should be more than just peer reviewed articles. I take their views seriously, both as an academic, parent and grandparent.

As the silence from some quarters becomes pervasive it also reminds me that for those of us who do speak up and transcend the silence; by speaking up I wonder how long it will take the liberals to bawl out words like ‘militant’, ‘radical’, and ‘too political’.

For academics we have a double challenge. Do we act as field slaves and risk being beaten by the master? Or do we remain in the master’s house and risk becoming a victim of those in the field who expect those of us with a few more privileges to be more pro-active in challenging injustices like the one that took place this morning.

What would we say to the countless victims of this injustice? More importantly what would you tell my son this morning?

Ethnic and gender inequalities in PG progression must be urgently addressed

Cultural democracy is… when age and skin colour don’t matter 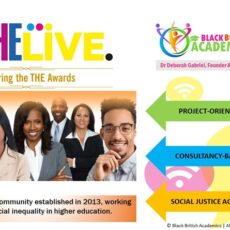