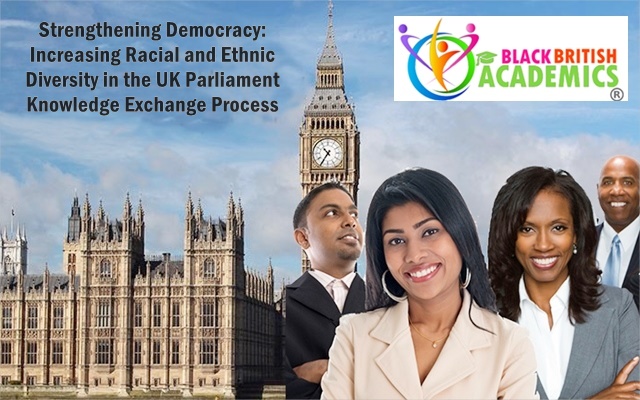 We are currently working with the Knowledge Exchange department at UK Parliament to increase the participation of academics of colour from under-represented groups in the knowledge exchange process. Addressing racial disparities and increasing the diversity of researchers whose studies inform government policy is essential to democracy. Our collaborative project aims to:

Join us on 12th March at UK Parliament’s Knowledge Exchange Unit in Westminster to:

We are holding this event because we know that academics of colour from some groups are under-represented in engaging with the UK Parliament, based on both statistical and anecdotal evidence.  We want that to change.

The event is aimed particularly at academic researchers who have thought about engaging with Parliament and would like to learn more about how to do so.

PLACES FOR THIS EVENT ARE LIMITED AND WILL BE ALLOCATED ON A FIRST-COME-FIRST SERVED BASIS.

LEARN MORE ABOUT THIS EVENT AND APPLY FOR A PLACE HERE

“Parliament’s Knowledge Exchange Unit is running a series of activities focused on groups of researchers who are under-represented in UK Parliament, aiming to diversify the voices of researchers heard at Parliament.  Black British Academics have worked with the Knowledge Exchange Unit to shape the activities around 1Black researchers; together Black British Academics and Parliament aim to identify barriers to participation and explore and implement strategies to increase engagement between Parliament and 1Black researchers.  The research paper is based on information coming from this joint work, but it does not aim to represent the views of Parliament or parliamentary staff.”

1‘Black’ is used politically and inclusively and refers to people of African descent, Indian, Pakistani, Bangladeshi, Chinese and multiracial backgrounds. While it is accepted that these groups are heterogeneous, we are united as a strategy to foster unity and facilitate collaboration. See our statement on racial categorisation and terminology.